What is the Right to Transfer?

The Right to Transfer under Section 34A of the Housing Act 1985 is the right that all Council Tenants have to come together as a neighbourhood, form a not-for-profit organisation and request to take ownership and control of their own homes.

Once the request has been submitted to the Council, it has to receive the following in order to proceed:

First: Consent from the local authority and/or the Secretary of State for Communities and Local Government.
Then: Consent from the majority of members of the not-for-profit organisation via a vote
And: Approval of the majority of Secure Council Tenants living in the neighbourhood via a ballot.
And finally: The final consent of the Secretary of State

West Ken Gibbs Green Community Homes has been set up by the residents of the West Kensington and Gibbs Green estates as the not-for-profit organisation to carry forward a Right to Transfer application for the two estates. A majority of residents on the estates are members of this organisation, and members elect the board.

Our request was submitted to Hammersmith and Fulham Council in August 2015 and then passed on to the Secretary of State. We are still waiting to hear from the Secretary of State as to whether we can proceed with the next stage of the Right to Transfer process, which would include going to a ballot of Council Tenants and a vote of all members.

You can read more about the Right to Transfer and how it works below. Or get in touch to find out more. 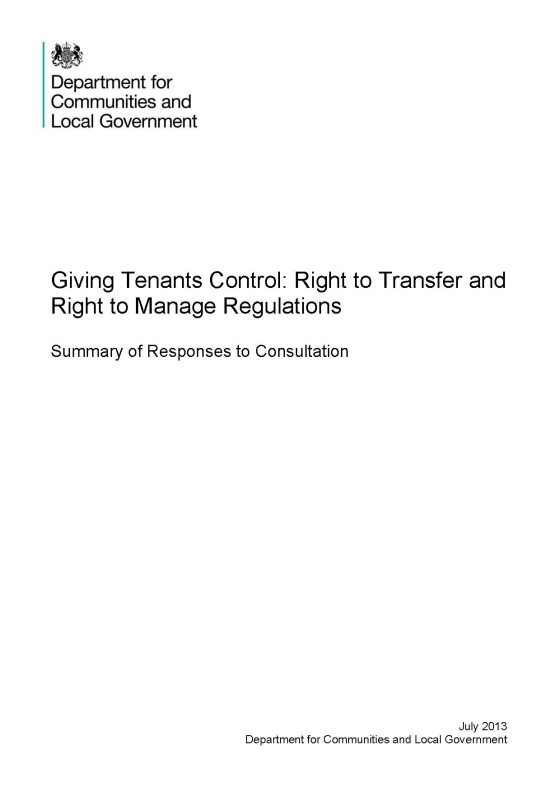 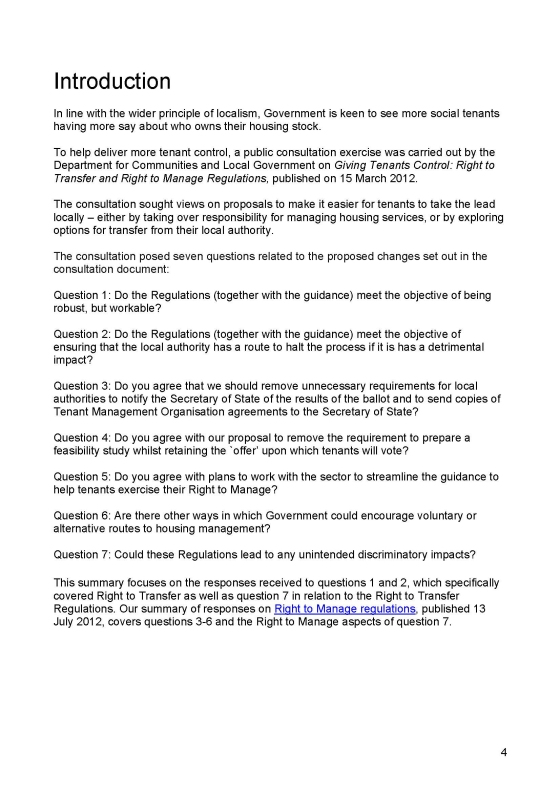 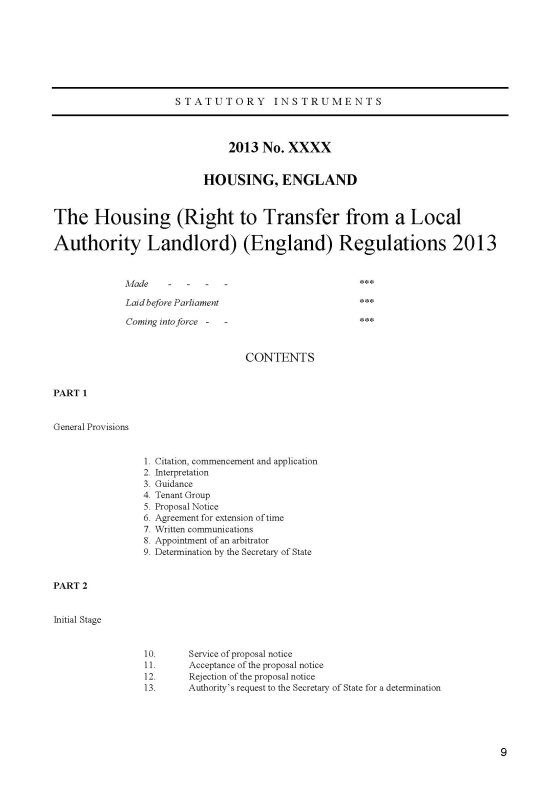 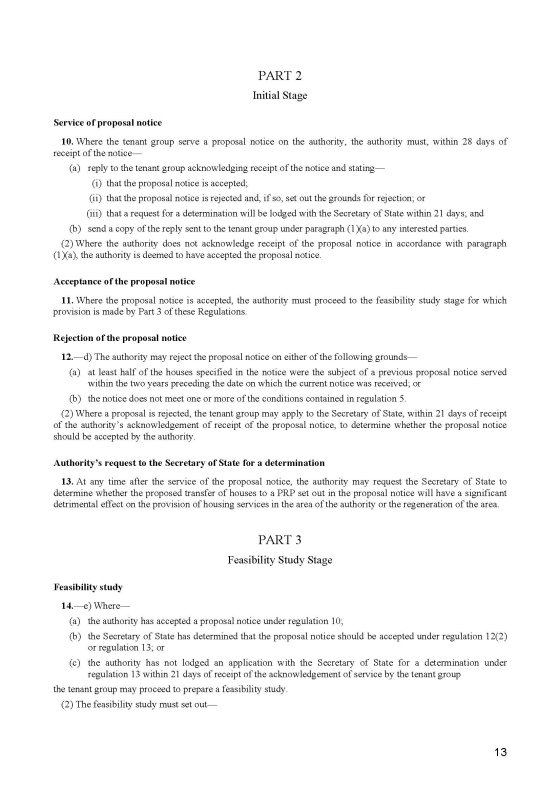 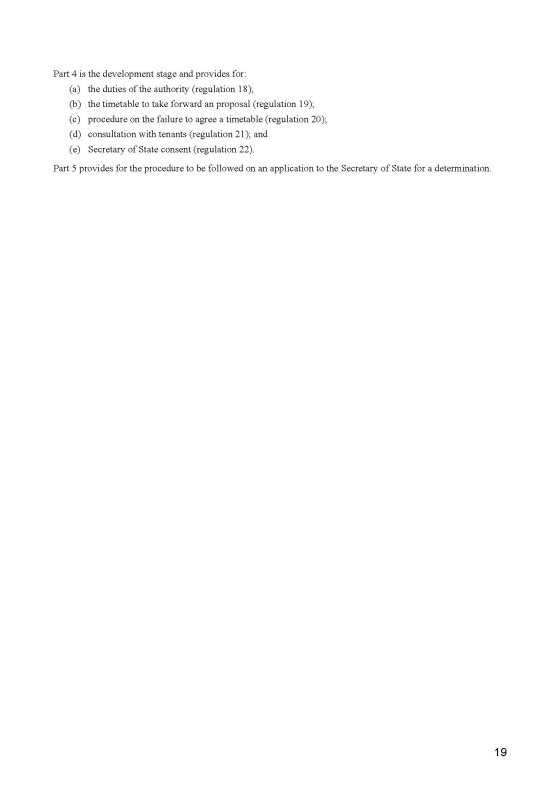 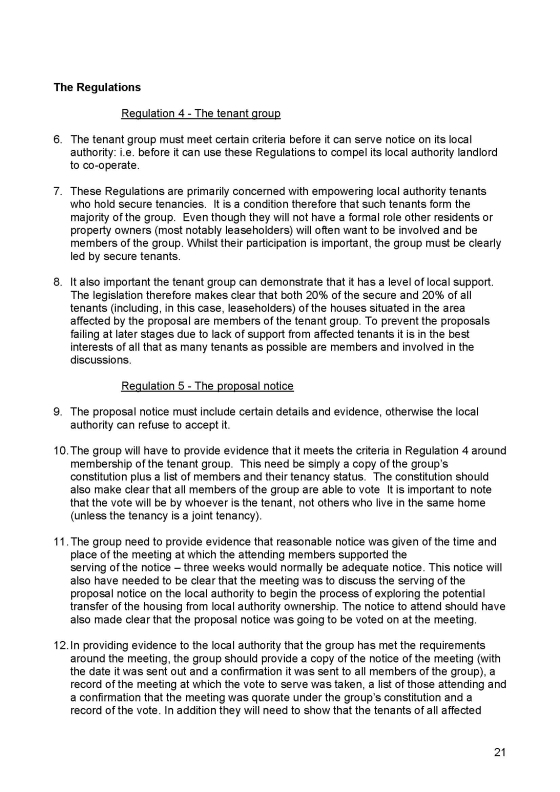 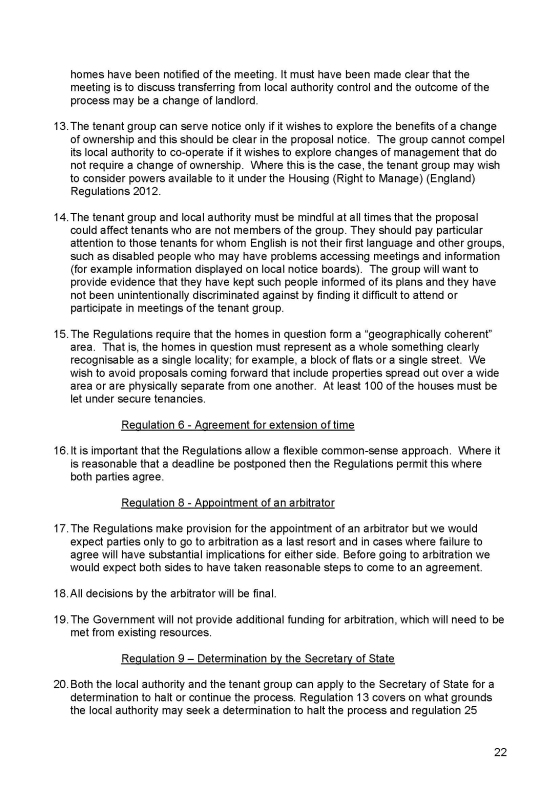 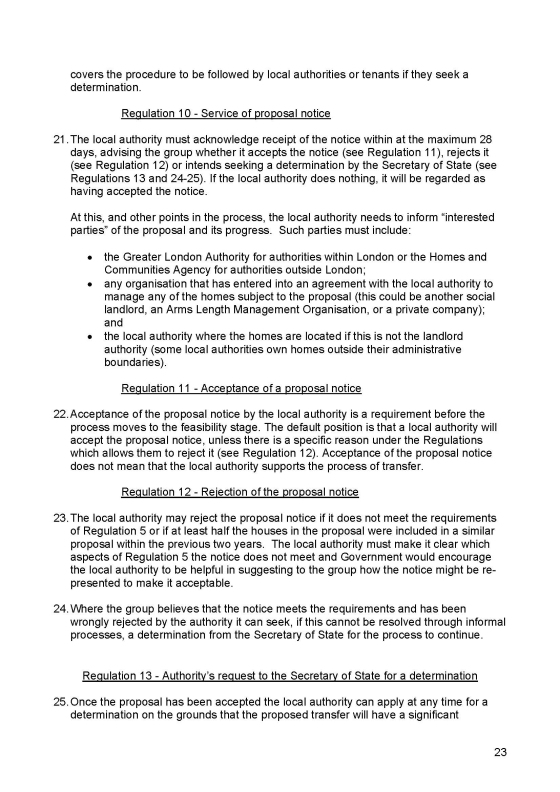 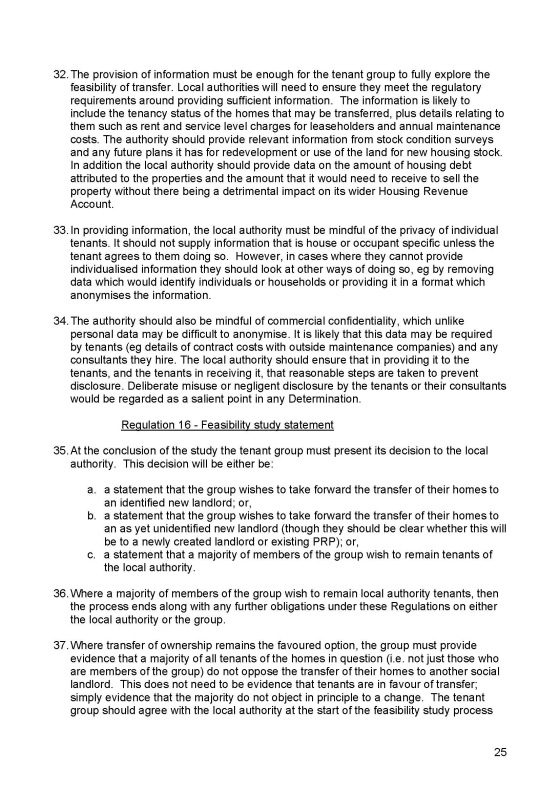 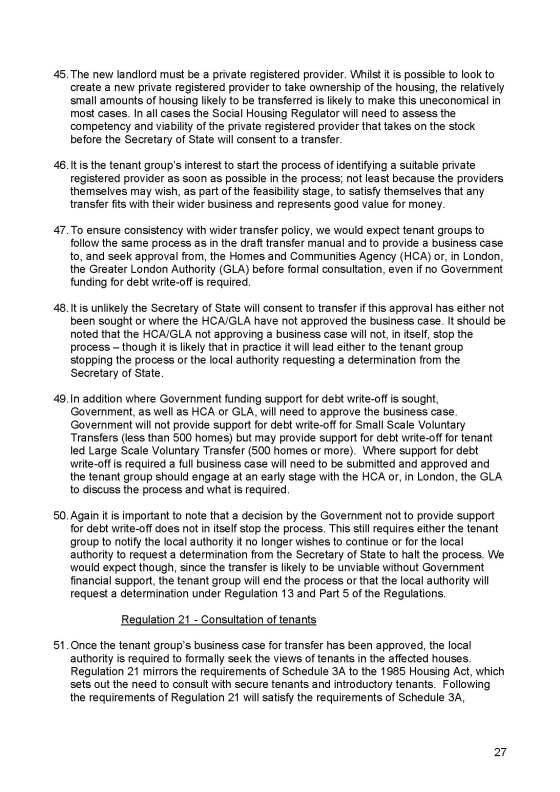 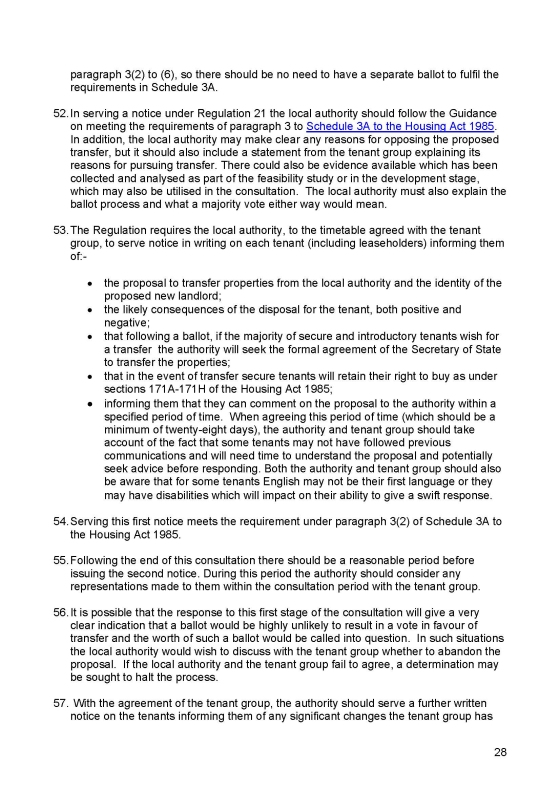 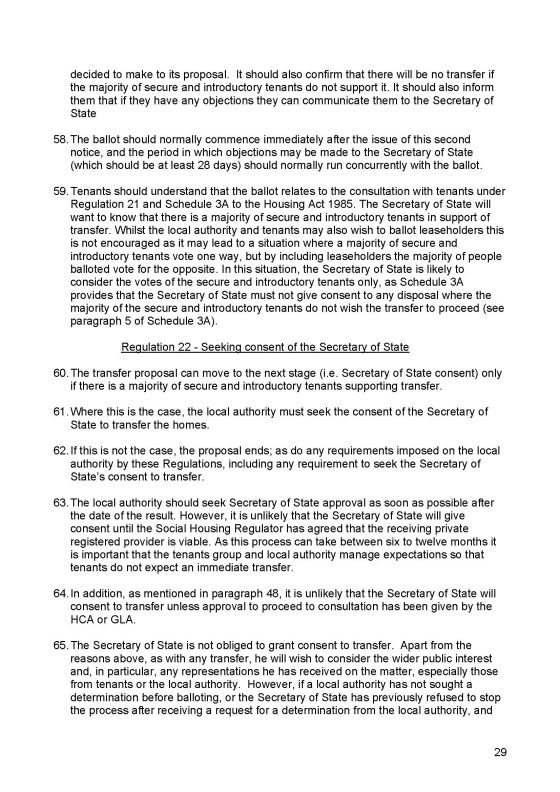 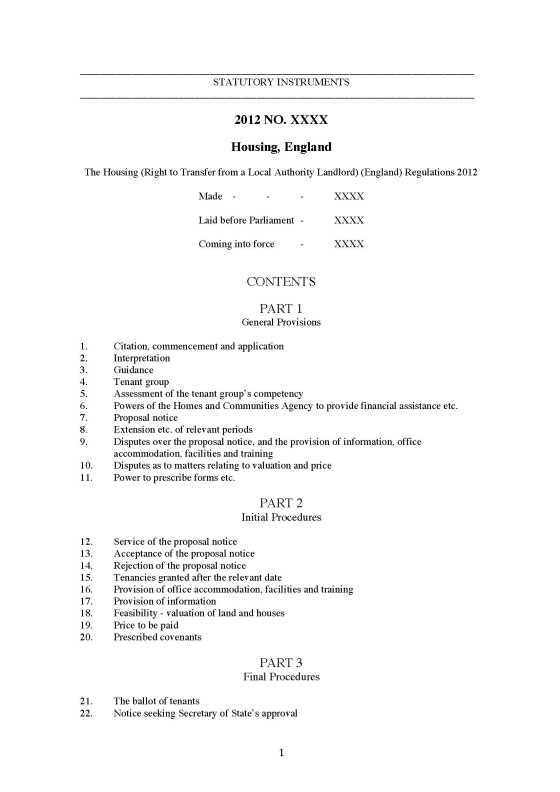 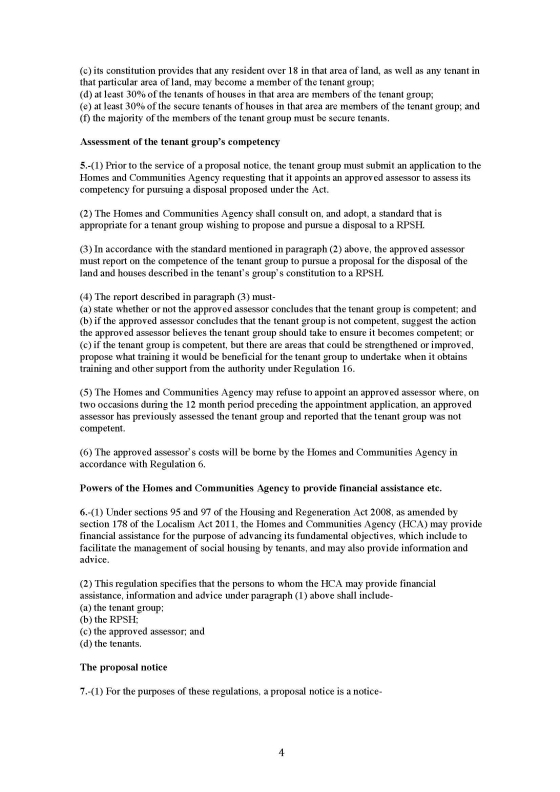 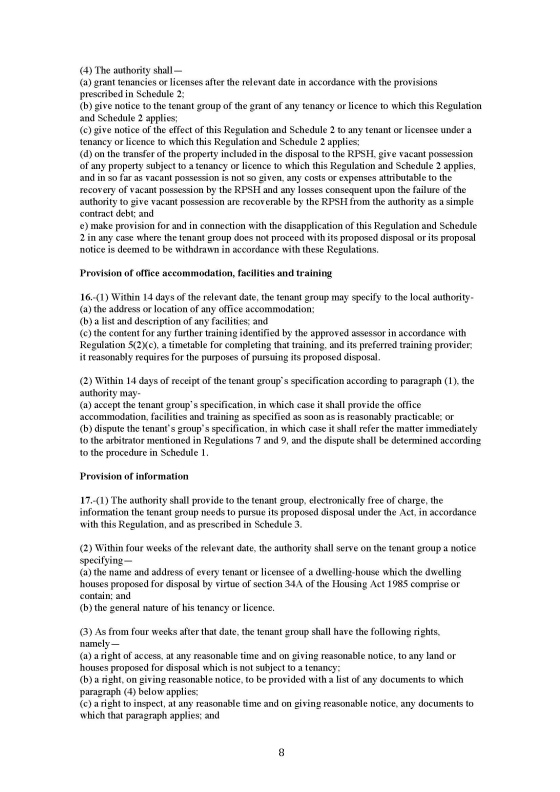 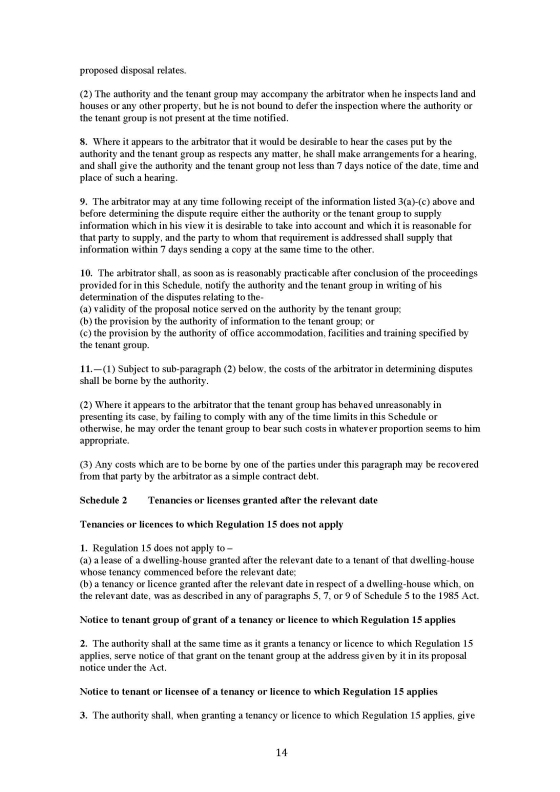 Plans to make it easier for council tenants to take control of their local neighbourhood and services were announced today by Housing Minister Grant Shapps.

Mr Shapps challenged tenants who feel their landlords have neglected their neighbourhood to exercise their rights and take matters into their own hands in the spirit of last year’s riot clean-up crews.

The Minister today published plans to strengthen and streamline two key rights that can help tenants achieve this.

The Right to Manage gives tenants the chance to take over the day-to-day management of housing services such as cleaning, repairs, refurbishment and security to deliver a more responsive, better quality and value for money service for their community.

New proposals will streamline the piles of paperwork involved in transferring management responsibilities to a tenant organisation, speeding up the handover process.

The Right to Transfer allows tenants to request the ownership of council homes in their neighbourhood to be transferred from the council to a local housing association. This could be because tenants believe this new landlord could provide better services like cleaning and security or bring more investment into their area such as improvement to peoples homes and the environment.

At the moment tenants can put forward a case for transfer, but councils have no obligation to consider their proposals. The changes proposed today will strengthen these rights, requiring councils to work with tenants to explore transfer requests.

“Last year’s ‘broom army’ action in the aftermath of the riots demonstrated the real difference a community can make when they come together for the good of their area. The rights I’m strengthening today can put decision making power into the hands of the tenants who know their neighbourhoods best.

“I want to make it easier than ever for council tenants to take charge of local services, from minor repairs to major regeneration. And it will no longer be acceptable for councils to dismiss tenants’ proposals for improvement out of hand.

“Nobody knows the needs of a neighbourhood better than the local community. Now I want to see tenants use these powers to prove us right.”

Communities across the country are already taking advantage of their Right to Manage their area:

1. The consultation runs until 23 May 2012, and comments are being invited from a wide range of consultees from across the local authority, housing and tenant sectors.

3. Right to Transfer Regulations would put a duty on local authorities to co-operate with tenant groups in following a process for exploring transfer options, and if, after this exploration there is evidence of support for a transfer, to consult all the affected tenants.

4. By following the procedures set out in Right to Manage Regulations, a tenant management organisation can enter into an agreement with their local housing authority to take over responsibility for managing local services.

5. Giving Tenants Control: Right to Transfer and Right to Manage Regulations – Consultation proposes streamlining these regulations so that it is easier for tenant management organisations to take over responsibility for delivering local services from their local authority landlord.

Keep up to date with the Department by following us on Twitter (external link).

Access the document Giving Tenants Control: Right to Transfer and Right to Manage Regulations at www.communities.gov.uk/publications/housing/transfermanageconsult

December 2009: Andy Slaughter MP (right) hands Secretary of State, John Denham MP (left), our letter inviting him to make Regulations under S34A requiring the Council to co-operate with us

2009: Residents vote at a General Meeting to serve the S34A Notice  on Hammersmith & Fulham Council proposing the transfer of their homes into community ownership. 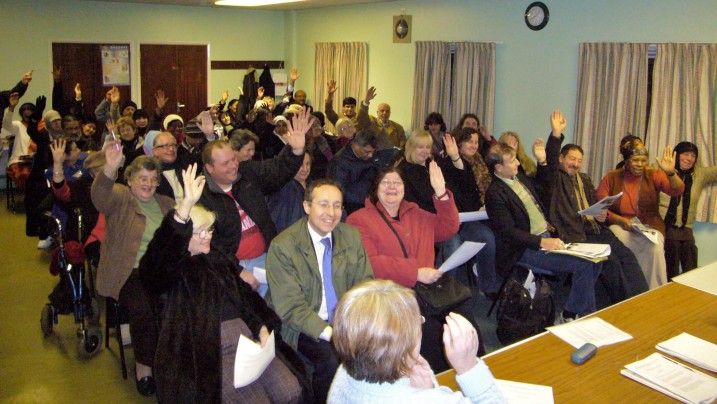 What is the significance of the Government’s decision to make the regulations for S34A of the Housing Act 1985?

Section 34A requires a local authority to co-operate with a formal notice from a tenant group to transfer ownership of council homes and estates. It was introduced to the 1985 Housing Act by way of S296 of the Housing & Regeneration Act 2008.

S34A was brought into force in December 2008, but the Housing Revenue Account Review delayed making the regulations required to implement it.

The Prime Minister and his Ministers have stressed that collective action, empowerment and asset transfer to local communities are the best way to transform neighbourhoods, and to tackle poverty and social breakdown.

So the Government has decided to press forward with making the regulations as part of its Localism agenda, and has branded the policy the Right to Transfer.

S34A is the ‘son’ of the Tenants Choice legislation that was introduced by the Conservatives in 1988, and used by Walterton & Elgin Community Homes (WECH) to wrest their estates from Dame Shirley Porter when she was gerrymandering Westminster Council. Tenants Choice was repealed in the mid 1990s.

CLG revised its impact assessment for S34A to take account of Localism and Big Society policies and data from an academic study undertaken by WECH proving that empowerment through asset transfer leads to marked improvements in happiness and wellbeing.

What is the significance of S34A?

Section 34A was enacted by the last Labour Government and the regulations will be made by the current Conservative/ Liberal Democrat Coalition. Therefore, the Right to Transfer will be especially significant for being made and implemented by all three parties in government. This should lend it additional political and legal weight.

S34A is a ready-made mechanism for implementing the Big Society in council-owned neighbourhoods. It’s the thin end of the wedge for capitalising some of the poorest communities in the country. It gives them value as well as power, which they can lever to the benefit of their neighbourhood.

Mutualising social housing by transferring council estates to community-owned landlords could unleash local innovation and commitment to transform broken neighbourhoods far beyond what could be achieved through top-down statist solutions.

On 8 December 2009, West Kensington & Gibbs Green Estates Tenants and Residents Associations became the first tenant group in the country to serve notice under Section 34A of the Housing Act 1985 proposing the transfer of their estates to a resident-controlled community landlord.

Across the UK, there are more than 600 housing co-ops and mutual housing associations. At least a dozen tenant groups England and Wales, representing perhaps 7,000 households, already want to use S34A to take ownership of their estates.

In Scotland, thanks to the 1997 Transfer of Crofting Estates Act and the 2003 Land Reform (Scotland) Act, well over a dozen communities own significant acreages.

In the Outer Hebrides alone – the 130-mile long chain of islands stretching from the Butt of Lewis to Barra Head – more than half the total land area is in community ownership and more than two-thirds of the total population live on community-owned land.

Requirements to co-operate in relation to certain disposals of land

After section 34 of the Housing Act 1985 (c. 68) (consents in relation to disposals of land held for housing purposes) insert—

“34A    Requirements to co-operate in relation to certain disposals

(1)        The appropriate person may make regulations for imposing requirements on a local housing authority in any case where a tenant group serves written notice on the authority proposing that the authority should dispose of particular land held by them for the purposes of this Part, or a particular description of such land, to a relevant housing provider.

(2)        The regulations may make provision requiring the authority—

(a) to provide, or finance the provision of, such office accommodation and facilities, and such training, as the tenant group reasonably requires for the purpose of pursuing the proposal;

(b) to arrange for such feasibility studies with respect to the proposal as may be determined by or under the regulations to be conducted by such persons as may be so determined;

(c) to provide to the tenant group such information or descriptions of information, in connection with the proposal, as may be prescribed in the regulations;

(d) to take, in circumstances prescribed in the regulations, such other steps as may be so prescribed to co-operate with the tenant group in connection with the proposal;

(e) to arrange for such ballots or polls with respect to the proposal as may be determined by or under the regulations to be conducted by such persons as may be so determined; and

(f)  in such circumstances as may be prescribed by the regulations, to enter into an agreement for the disposal.

(a) for determining the houses and other land to which the disposal should relate, and the amounts which should be paid in respect of the disposal;

(b) requiring the agreement for the disposal to be in such form as may be approved by the appropriate person and to contain such provisions as may be prescribed by the regulations.

(4)        The regulations may make such procedural, incidental, supplementary and transitional provisions as may appear to the appropriate person necessary or expedient, and may in particular make provision—

(a) for particular questions arising under the regulations to be determined by the authority or the appropriate person;

(b) setting time-limits for the carrying out of requirements under the regulations;

(c) requiring any person exercising functions under the regulations to act in accordance with any guidance or directions given by the appropriate person.

(7)        This section does not affect any requirement under section 32 or 33 for the consent of the Secretary of State or the Welsh Ministers.

(b) are to be made by statutory instrument which—

(i) in the case of an instrument made by the Secretary of State, is subject to annulment in pursuance of a resolution of either House of Parliament; and

(ii) in the case of an instrument made by the Welsh Ministers, is subject to annulment in pursuance of a resolution of the National Assembly for Wales.

(a) in relation to England, the Secretary of State; and

(b) in relation to Wales, the Welsh Ministers;

(a) in relation to England, a registered provider of social housing; and

(b) in relation to Wales, a registered social landlord;

“tenant group” means a body or other person which satisfies such conditions as may be determined by or under the regulations.”

7 December 2009: Our Notice to quit to Cllr Stephen Greenhalgh: 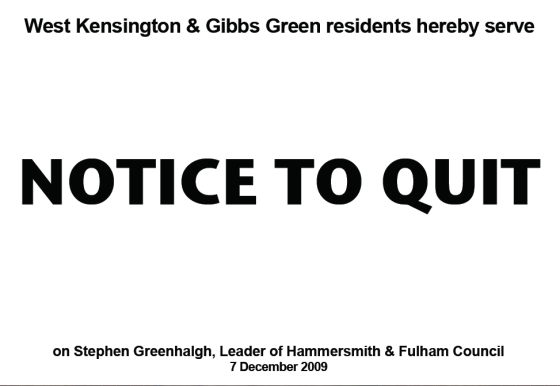 FIND OUT WHAT THE PEOPLE REALLY THINK!